Volatile Organic Compounds (VOC), used in automobile painting and various other fields, are the main causative agent of photochemical smog, etc., and reducing these VOC emissions has become a major social concern in recent years.
Taikisha has been undertaking the development of high-heat recovery efficiency, direct fired regenerative thermal oxidizers (RTO) with superior energy-saving properties over the years based on its VOC-reduction technologies developed in the automobile paint finishing system business field. The equipment performs oxidative decomposition at a high temperature, allowing most VOC to decompose, and achieves a high thermal recovery rate of 95% or higher.
Another feature of the equipment is that it can perform self-sustained combustion operation, whereby high temperature conditions can be sustained only with combustion heat of a solvent if the level of VOC is high.
Taikisha has a track record of selling more than 400 units of dual-tower RTO and more than 90 units of rotary-type RTO and offers wide-ranging product lines.

In recent years, environmental regulations have been tightened at a dramatic pace in China, in line with the rapid heightening of environmental awareness.
Crackdowns by the environmental protection department of the Chinese government and environmentrelated organizations of local governments are intensifying. In some regions in China, the emission standards related to air pollution include a limit of total emission volume under constant monitoring. There are more than a few cases where environmental standards stricter than Japan's are adopted.
Under such circumstances, Taikisha's triple-tower RTO (direct fired regenerative thermal oxidizer) has been appreciated for its high VOC removal efficiency and energy-saving properties, and it has been increasingly adopted mainly by Japanese companies.
Compared to a dual-tower RTO, a triple-tower RTO is capable of returning the untreated gas to the RTO by allocating one of the three towers to serve as a purge section, preventing gas from being released directly into the atmosphere and enabling a VOC treatment efficiency of 99% or higher.

Track record of construction in China

The System Enables Overall VOC Treatment Efficiency of 99% or Higher, while at the Same Time Saving Energy for Operating the RTO.

To address some clients' request for treatment of a high airflow gas with a low concentration of VOCs, Taikisha also proposes a solution in the form of a system with a two-stage VOC concentrator installed as a prior step to the triple-tower RTO to absorb such a gas to convert it to a low airflow gas with a high VOC concentration before treatment of the gas with the triple-tower RTO. This system the same time saving energy for operating the RTO. For that reason, an increasing number of units of this system have also been adopted in China.
Taikisha sold more than 115 units of VOC exhaust-gas treatment systems throughout China. In addition, Taikisha's local production and procurement structure is now in place in China, which enables us to offer quality products comparable to those of Japan at competitive prices in China.

Having Enhanced Its Maintenance Structure

Having enhanced its maintenance structure following the increase in units sold, Taikisha is now capable of responding quickly to maintenance demand.
Going forward, Taikisha will strive to further contribute to reducing the environmental impact in China through ceaseless efforts such as offering information and guidance on China's environmental regulations for many companies including Japanese companies, as well as enhancing the promotion of its counter-air-pollution technologies for environmental organizations in China.
Also in the future, Taikisha will proactively expand its business to Southeast Asia and India as well as in China.

Reduction of Environmental Impact by Utilizing Our Solvent Recovery Technology

Rapid dissemination and increasing adoptions of eco-friendly cars such as electric vehicles (EVs) and plug-in hybrid electric vehicles (PHEVs) are seen nowadays, especially in China, Europe and the United States. As a major energy source of EVs and PHEVs, lithiumion secondary batteries are the most common. For the production of lithium-ion secondary batteries, N-Methyl-2-Pyrrolidone (NMP) is the essential solvent. From the manufacturing process of these batteries, high volumes of gases containing NMP are emitted.
Taikisha possesses ample experience in its NMP Recovery System to recover NMP from gases containing NMP, and this system has been adopted by many battery makers. 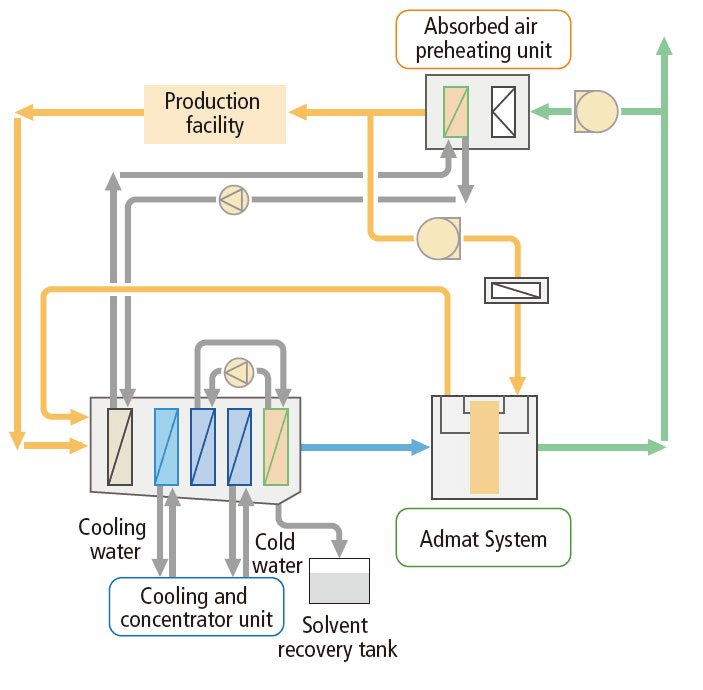